You are here: Home / Touring Shows / Past Shows / The Imaginators 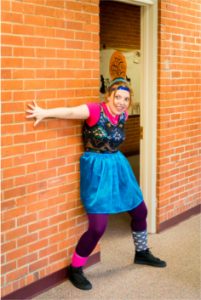 The Imaginators, written by Dwayne Hartford and directed by Lynne Streeter Childress, is the story of three children and the power of imagination. Anne and Tim have just moved to a new town. Anne refuses to play with her little brother, Tim, fearing that kids at her new school will see them and make fun of her. Then they meet the girl from next door, the fabulous Nina Frances Elizabeth Vanderhelden. Using moving boxes and other objects found in the garage, Nina takes an eager Tim and a reluctant Anne on a great make-believe adventure. The three battle the child-eating monster, the Mooklecratz. The children discover their own strengths, the value of cooperation, and the unlimited power of their imaginations as they figure out how to defeat the beast. The play encourages children and adults alike never to lose their sense of play and creativity.

The Imaginators is produced by special arrangement with THE DRAMATIC PUBLISHING COMPANY of Woodstock, Illinois.

Our Fall 2020 season of classes looked different than we thought …

Building Better People Productions was started because we see …